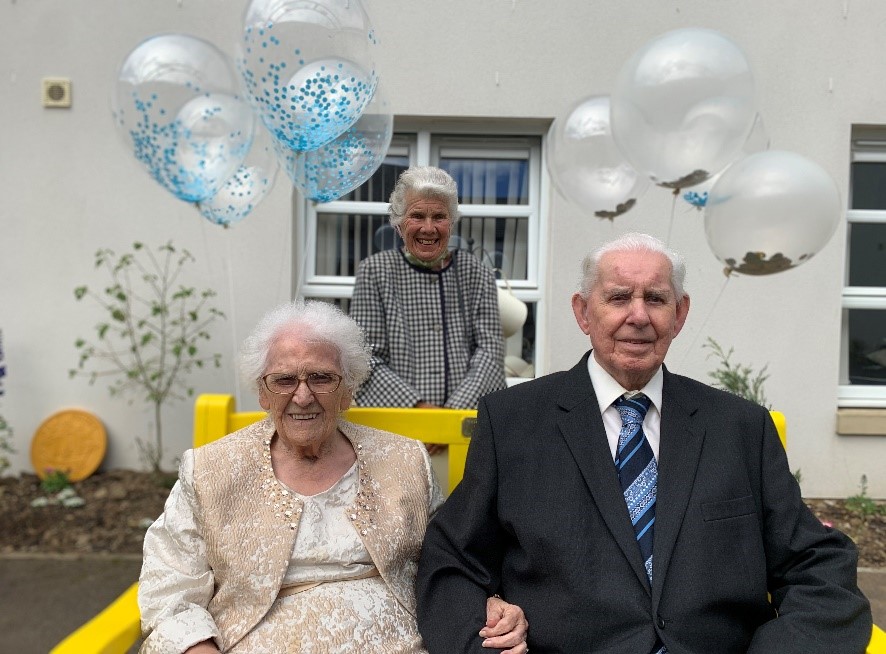 IMAGES FREE TO USE

Two of Balhousie Huntly’s care home residents, George and Christian Christie, have been celebrating their 70th wedding anniversary together at the care home.

They first set eyes on each other at a dance they were both attending at the Beach Ballroom, Aberdeen. The couple were married on 23rd June 1951 at St Peter’s Church in Torry, Aberdeen. Best man was Bill Walker, George’s friend from school. Christian’s long-time friend Christine Laing was bridesmaid. Two weeks later, George attended Bill’s wedding as his best man. Says George: “I was honoured to be my chum’s best man, we had many great times.’’

George was born in 1926 in 141 Victoria Road Aberdeen; Christian was born in 1928 in 8 Powis Place, Aberdeen. George started working life as a cutter in Hall Russel shipyard Aberdeen then took on an apprenticeship as marine radio engineer with George Matheson and Co. during WW2. George  attended the then Robert Gordon Institute of Technology part-time to study as a radio engineer then set up his own company called Telemarine Radio Company to service many inshore fishing boats. Following this he worked as a Chief Technician in the Department of Medical Physics of the University of Aberdeen, working to support NHS Grampian.

Christian started working life as a comptometer operator with the Co-op in Aberdeen until she was married. After James, their only child, grew up she worked in the University of Aberdeen Library cataloguing section.

They lived in Torry until coming to Balhousie Huntly in 2019. Seventy years after they married, George and Christian have many stories of the good times they have shared and the life they have witnessed. Even after all these years they both say the love they had the day they met hasn’t disappeared and there is a strong bond never to be broken.

Balhousie Care Group was formed 30 years ago to fill a gap in quality residential care in North East Scotland. Today, with 26 homes in the area, it is one of the leading providers of care for the elderly in Scotland, providing care to over 900 residents.

Balhousie Care prides itself on its person-centred approach to care. Putting people right at the forefront of everything they do; it’s inclusive of everyone. They capture this philosophy through the roll out of ‘Together We’re Great’, an initiative which recognises the skills, talents, attributes and support areas for each and every person involved in the organisation. Together We’re Great aims to value individuality and promote excellence across the organisation.

A Participation Charter – a first-of-its-kind in the care home sector – commits to residents getting a bigger say than ever in the care they receive, from writing care home policies to recruiting staff.