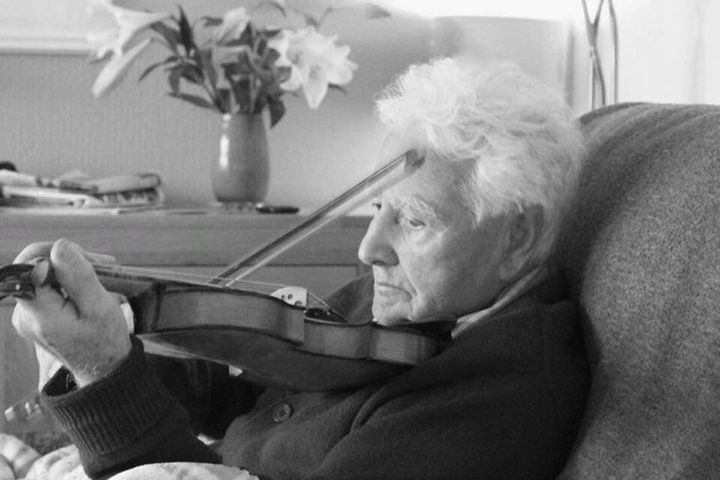 Staff at a Perthshire care home were honoured to receive a prized piece of artwork by local sculptor Cameron Thomson, a former resident of the home.

Cameron Thomson, renowned for his horn and wood carvings, died peacefully at the Balhousie Care Home in Luncarty aged 96. In memoriam of Cameron, and as a thank-you to the care team who looked after him, his family donated one of his wooden horses to the home.

The care home also received a donation of £165 which was raised at Cameron’s memorial service and was given to the care home’s residents’ comfort fund.

Roz McMillan, grand-daughter of Cameron, described the care home team as “absolute angels”. She said: “We wanted to pay tribute to the wonderful, outstanding team at Balhousie Luncarty. They were so so kind and good to him. It was obvious the affection held for him was genuine and enormous, and was such a comfort to us.”

Born in Alvah, Banff on March 9, 1925, Cameron was one of six children brought up on a farm where his father worked. This country upbringing fed his interest in carving; as a young boy he enjoyed making things out of the logs that sat by the fire. This interest continued into adulthood. He married Martha and they lived in Aberdeenshire before moving to Kindrogan Estate near Enochdhu, Blairgowrie where he worked as a handyman.

He and his family moved to Lawers on the north shore of Loch Tay, where Cameron had a proper workshop, and a showroom for selling his horn carvings. He used horn from antlers, sheep and cows to make crooks, spoons, shoehorns, buckles, lamps and whistles which he sold to tourists. He even featured on the STV history and travel programme Weir’s Way – along with the wooden horse that now sits proudly at Balhousie Luncarty.

Known as the Horn Carver of Lawers, Cameron was also a gardener, mole catcher, fencer, school bus driver, clay modeler, fiddle-maker and photographer. He was still taking on handyman projects at the age of 91.

Diane McLeish, a celebrant of the Humanist Society, spoke at Cameron’s funeral. She described Cameron as “fabulous, funny and talented… with a big heart and remarkable kindness”.