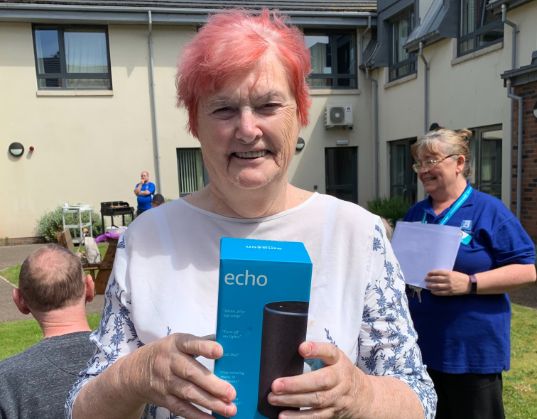 After a company-wide competition which saw several of our care homes making videos to the music from The Greatest Showman, Balhousie Monkbarns emerged as a clear winner.

Monkbarns won the competition, set by our dementia care team, for a video which saw residents singing and tearing up signs with stigmatising words on it. Votes were cast publicly on Facebook and Monkbarns’ video got an incredible 11,000 hits!

Residents and staff sang clips of music from hit musical film The Greatest Showman, while carers Fiona and Dani took the main lead on the production of the video and employed student Ryan to do the editing.

Thanks to everyone who brought in props for dress-up and took part in the video. Monkbarns won an Alexa and The Greatest Showman DVD. Pictured is resident Sheana being presented with the prizes.

Well done everyone! We’re sure you’ll agree that the video is inspiring.