From military manoeuvres to caring for the elderly: how this Army ‘grunt’ found his true vocation 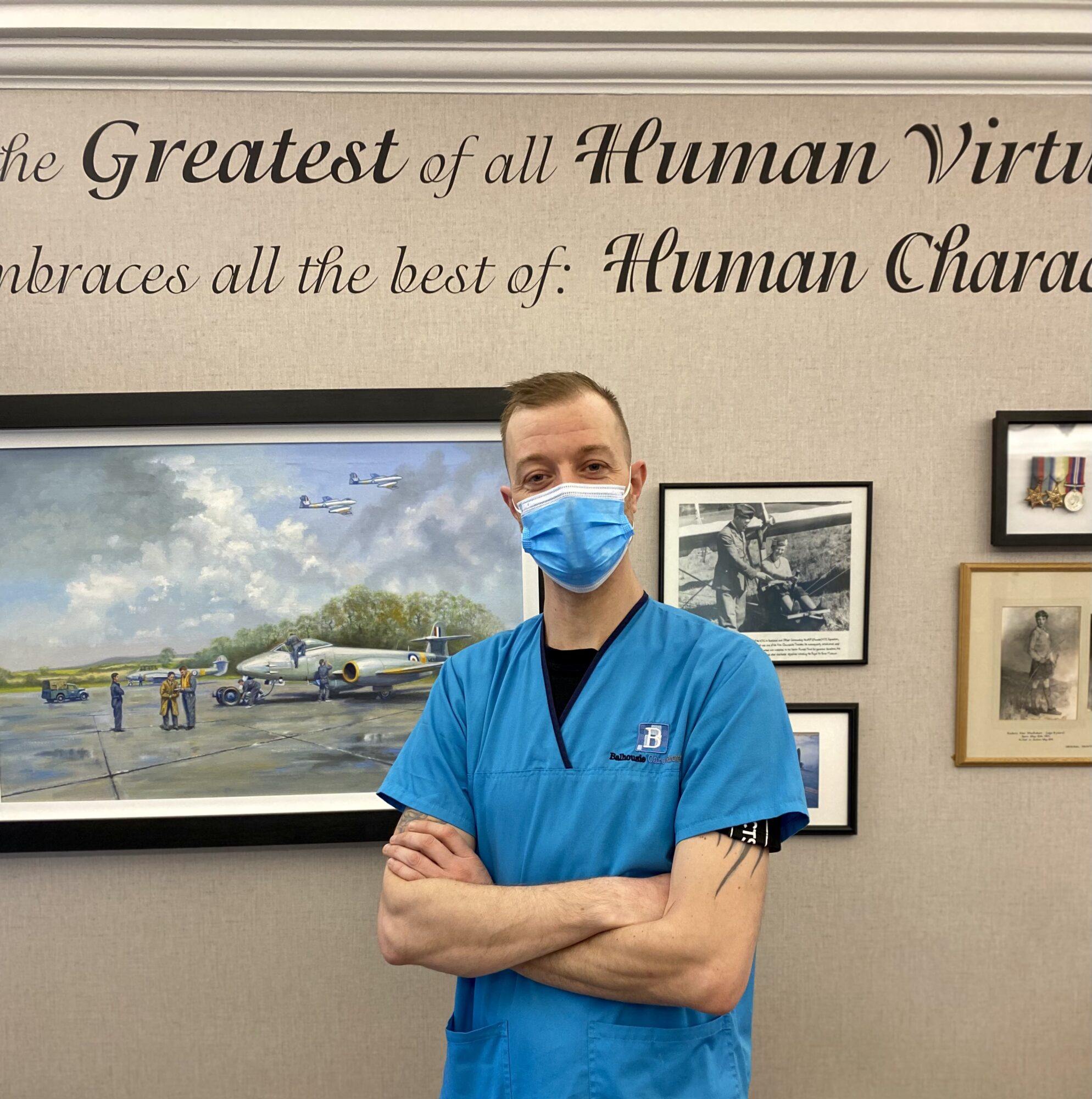 Everything about Alex Jones’s career has screamed action, adventure and the outdoors. He has taken part in army manoeuvres in the former Yugoslavia and abseiled down the side of oil rigs in the North Sea.

But nothing has given him more satisfaction than his current job: as a care assistant at an Aberdeenshire nursing home.

The hours are long – he works 12-hour shifts – and his commute from Aberdeen to the remote village of Tarland lasts an hour each way. But Alex says simply: “I’ve never been in a rewarding job until this one. You’re made to feel you’re making a difference to someone, that you’re doing something positive. I never want to leave.”

So much so that Alex is already considering his new career in care and planning how he can progress up the ladder to a more senior care role, or perhaps into nursing.

Alex’s career has taken some interesting turns. After a stint in the Army as a Private he was medically discharged following a knee injury. He then volunteered to be a full-time carer for his grandad. He credits this experience with helping to nudge him along his path to social care.

“I spent 26 months living with my grandad after my gran passed away. I was his sole carer and it was a full-time job. I’d never really spent any longer than a couple of hours with him and now I was washing him, feeding him. He was an old style gentleman with a lot of dignity. It was hard for him and for me. But in the end that time was special. We had a bond that I’d never ever have had otherwise.”

Alex then took up a position as an oil rig rope access technician. “It’s basically abseiling from the top of the rig down the sides and carrying out repairs that no one else can get to,” he explains. “My dad, who also works in oil and gas, calls them ‘dopes on a rope’. It takes a certain sort of person to hang 30 feet up in the air on a bit of rope over the North Sea.”

He was paid off from the job in May 2021 and, with a daughter, partner and stepdaughter to help support, knew he needed work immediately. His auntie, who works in healthcare, had heard that Balhousie Alastrean care home in Tarland was hiring and urged him to apply. She saw how he had cared for his grandad and told him “you’ve got that sort of nature, you should give it a go.”

“Alastrean House is remote but it’s beautiful. She described it as the crème de la crème of care homes and she’s right,” he says. He applied and started as a care assistant within the month. 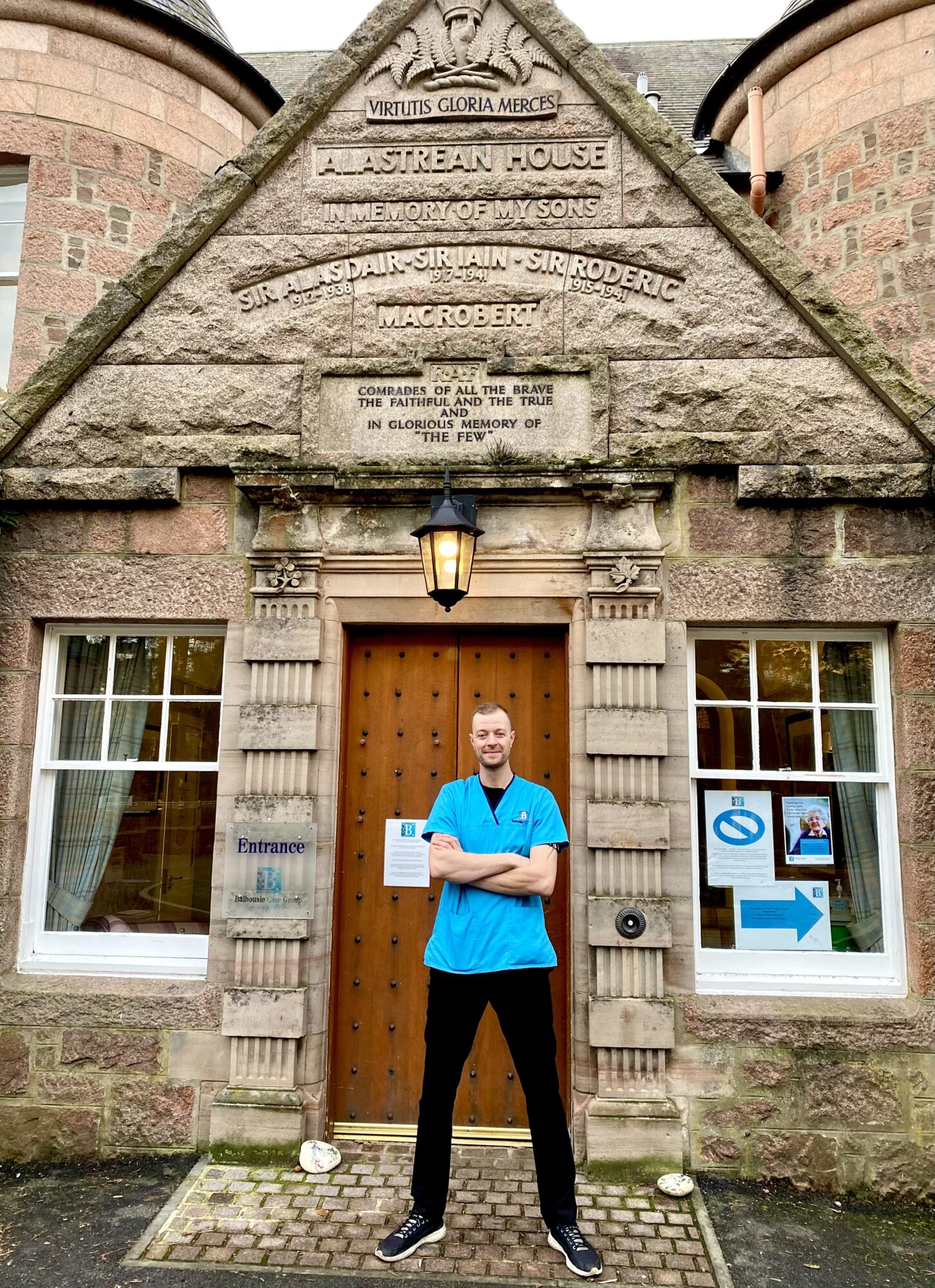 As with many care home shifts, his last 12 hours but span just a few days a week. He works Mondays to Thursdays, giving him a long weekend each week with daughter Freya (7), stepdaughter Katie (12) and girlfriend Lee. Added incentives for him are Balhousie Alastrean’s pay rates – starting at £11.50 an hour for care staff, they are some of the highest in the region – and a generous mileage allowance. “The pay is up there among the top ones in the area. The mileage allowance is 45p a mile. That alone puts £360 a month more in my pocket,” he says.

But what excites Alex about his new vocation is the same thing that leads others to work in care homes: the residents. “It’s getting to see a smile on someone’s face when the smiles may be few and far between. I see that glint in their eye and I’m happy. It melts me.”

Alex, affectionately known as “Big Sandy” to residents, finds a way to connect even with the most challenging personalities. “We have one resident who is ex Merchant Navy. He can be angry and grumpy sometimes. I started knocking on his door and asking ‘Permission to come aboard, sir?’ It makes all the difference to his mood.”

Alex’s experience caring for his grandad has shaped his approach to his job. “Now I just expect carers to have the same respect for care home residents as I had for him. That person is someone’s mum and granny and I know how I would feel if I was ever in a home, I’d want to be treated with the same respect.” 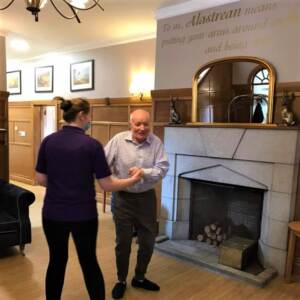 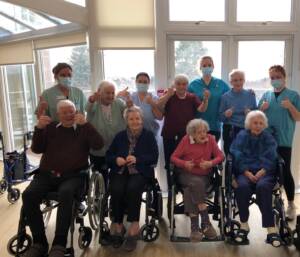 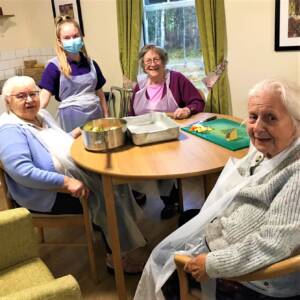 The other driving factor for him is the team at Balhousie Alastrean. As with the rest of Balhousie Care Group’s 26 care facilities, staff have become their own support mechanism at a challenging time for the care sector. Care homes and hospitals have been stretched to their limits with staffing, and the whole health sector is experiencing a recruitment crisis. Added to that is the ongoing COVID-19 pandemic, which Alex has not escaped; he had COVID last year. 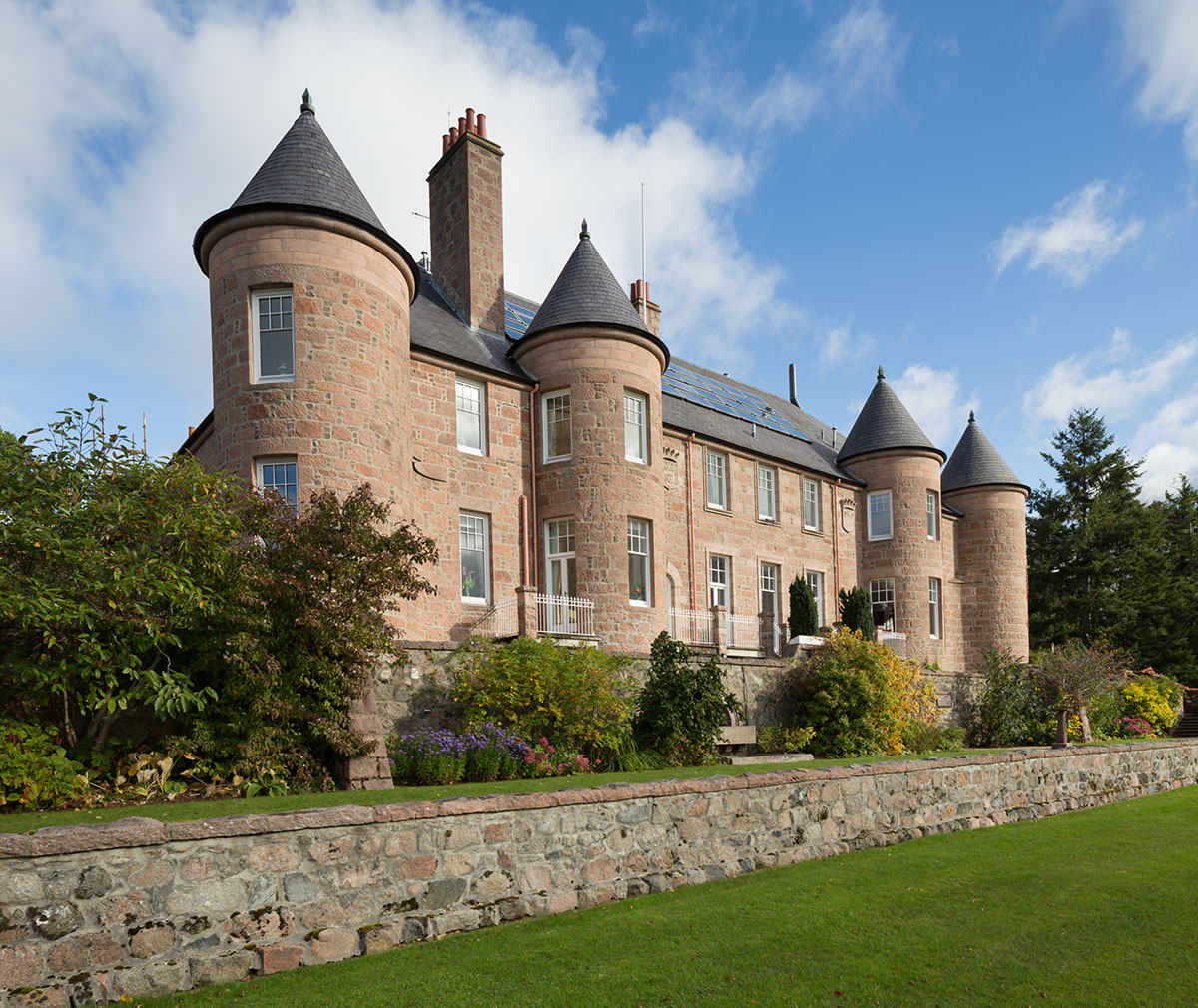 The stunning Balhousie Alastrean is set in vast landscaped grounds.

He says: “I have three nurses I work with – Teresa, Becky and Ale – who have supported me, made me stronger and made me want to do more. When I’m doubting myself they pick me up and tell me ‘Just be all you can be, that’s all you can do’. Plus I feel lucky to be part of a team that wants to make a difference to the home and goes above and beyond. You feel appreciated, the fact the manager asks your opinion and to help with things.”

Alex makes no bones about working in care: “It’s one of the hardest jobs I’ve ever had, mentally and physically challenging but in different ways than the army or working offshore was.”

But he loves that he is now a different sort of hero, getting his kicks not in a war zone or chasing an adrenaline high but in helping others. “I’ve never felt more fulfilled.”

Want to join Alex at Balhousie Alastrean? Visit our Job Board for current vacancies.