Fun and laughter at Antiquary with the Puppet Gang 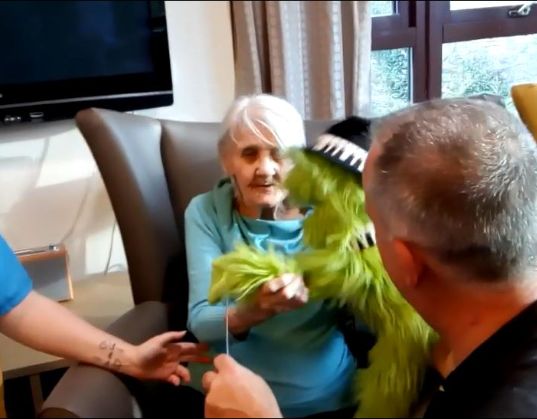 After a resident’s request for “something different”, Antiquary residents, staff and visitors, were not disappointed when they spent Tuesday afternoon being thoroughly entertained by ‘The Puppet Gang’.

Residents were engaged and amazed by the colourful performing puppets. With performances from ‘Green Martin, ‘Satchmo’, Boris, ‘Charlie Chaplain’ and ‘Hamish the Cheeky Scotsman’, smiles and laughter were in abundance.

While everyone sang along to the songs the puppet handler visited each resident with each dancing puppet, allowing them to touch, hold and hug them, which the residents did enthusiastically and, judging by the smiles and laughter, enjoyed immensely.

At the end of the puppet set the residents were fascinated with the show of giant bubbles. The magical colours and movement of the huge bubbles kept the residents fully engaged and there were lots of oohs, aahs, smiles and clapping, and a lot of laughter when activities coordinator, Aileen, was ‘bubbled up’ to resemble a holiday tourist along with a giant bubble ice cream, bubble-beer and bubble eyes.

Altogether it was an amazing, amusing, and fun-packed afternoon enjoyed by all.