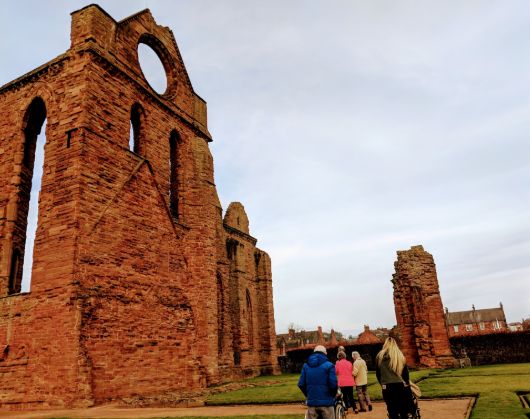 On the afternoon of 25th February a few of our residents took a trip to Arbroath Abbey ruins on the Oomph bus.  Sheena, Bill, Maud, Helen, Menary all thoroughly enjoyed their afternoon, many of them hadn’t been to the Abbey before or hadn’t been for several years.

One of the highlights for the residents, was finding out about the Stone of Destiny, which was stolen from Westminster Abbey in London and then hidden at the Arbroath Abbey in 1951, they chose to hide the stone in Arbroath Abbey because of the Declaration of Arbroath and its significance in Scottish history.

Everyone was captivated by the workmanship which must have gone into building a structure of that scale during that time.  All were in agreement that we were glad that it hadn’t been our job as the health and safety would have been extremely minimal!  Our interest was piqued further by the miniature model of what they think the Abbey would have looked like in its heyday.

Once our exploring had come to an end, and everyone had worked up an appetite, it was back onto the Oomph bus, and onto Morrison’s café for some hot libations and cake, before heading back to the home for tea!