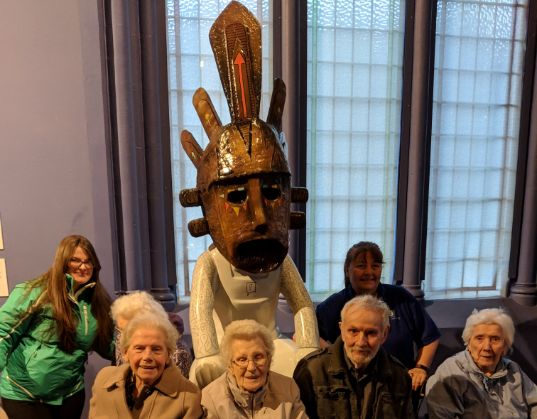 On the afternoon of Thursday the 10th of January some of our residents got the Oomph Bus to McManus Galleries in Dundee.  They all thoroughly enjoyed their afternoon looking at all the exhibits.  A big hit was a cabinet with old fashioned shoes, games and an old shop till.  The war exhibits were also very interesting to our residents, Bella especially because she is from Dundee.  The cabinet containing the information on the conscientious objectors or “Conchies”, men who objected to the First World War and were arrested and sent to work camps really captured Bella’s interest. Ewan Geddes Carr created an autograph book containing the names of his fellow objectors.

Don also enjoyed looking at the exhibits, especially the cabinet containing the recollections of certain aspects pertaining to WW1, such as; when people were concerned about their family members serving in the services, and they saw the telegram boy, they knew someone was going to receive bad news and everyone would pay attention to where the news was being delivered.  Don enjoyed looking at the WW1 uniform, medals and other regalia pertaining to the First World War.

Iris and Olive were also impressed by the variety available to the Galleries from “Modern Art”, to the more classic style of paintings, to the animals that were displayed which ranged from birds, deer and a bear.  All of the residents thoroughly enjoyed their trip to McManus Galleries, which was topped off by a stop at the cafe for a cuppa and a slice of cake which Gisela noted, “as wonderful end to the afternoon”.