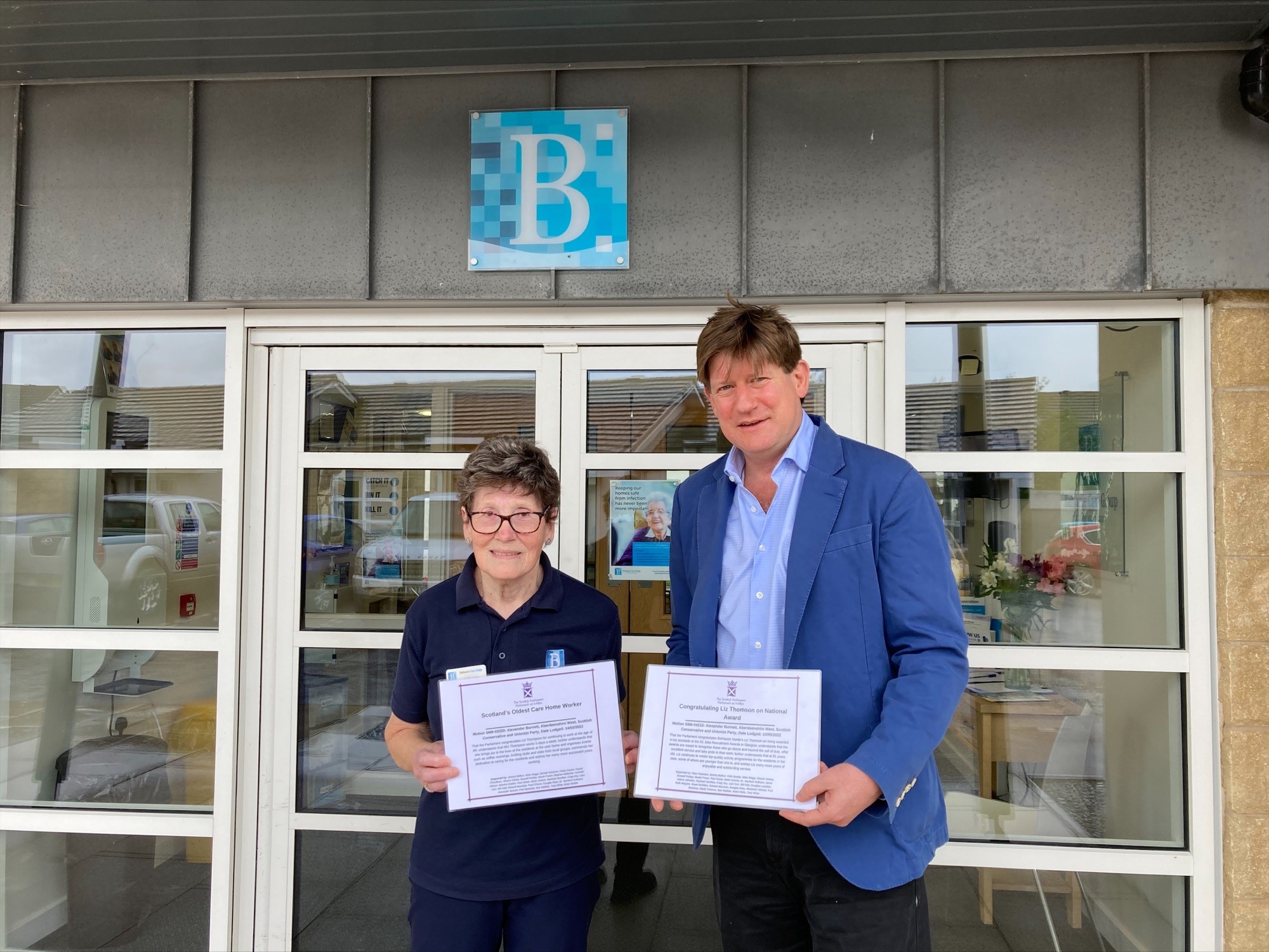 Liz Thomson, believed to be the country’s oldest care worker, has been honoured in two parliamentary motions lodged with the Scottish Parliament.

Liz, 81, who works at Balhousie Huntly care home, was congratulated for her “dedication to caring” by Alexander Burnett, Scottish Conservative MSP for Aberdeenshire West, in a motion supported by 26 other MSPs. Mr Burnett lodged a separate motion congratulating Liz on a recent s1jobs Recruitment Award which she won for her work as an Activities Coordinator at Balhousie Huntly.

“At 81 years old, Liz continues to create top-quality activity programmes for the residents in her care, some of whom are younger than she is,” said the second motion, lodged this month in the Scottish Parliament.

Liz, whose story of being a busy octogenarian care worker has been captured by newspapers and TV stations nationwide, received a visit from Mr Burnett this week.

Balhousie Huntly Home Manager Sarah Omand said: “This truly is Liz’s year. She has received such well-deserved attention for the amazing work she does here at Balhousie Huntly, where she keeps residents as busy and active as she is and delivers the sort of person-centred care the care home is renowned for. It helps that, being a local, Liz has known some of the residents for many years. Mr Burnett’s acknowledgement of Liz through these parliamentary motions is the cherry on the cake. On behalf of the whole home, we would like to thank him for this recognition.”

Alexander Burnett MSP said: “I was delighted to be able to present Liz with the two motions I lodged in Parliament in recent months recognising her exceptional dedication to caring and being awarded the Shona McKenzie Shine Award at the s1jobs Recruitment Awards.

“To continue working with such vigour at her age is truly remarkable and I know is greatly appreciated by residents and staff alike at Balhousie.”

Born in Portsoy, Liz worked in hospitality for many years and even ran her own hotel in the rural village of Rhynie before joining the Balhousie Huntly family when the home opened in 2012. The care home is one of 26 care facilities run by the award-winning Balhousie Care Group, which is celebrating its 30th year in business.

Liz is humble about her impact at the care home. It’s all just ‘every day’ to her. “I have tried retiring before,” Liz explains, “but I like working!” Liz has worked in many roles at Balhousie Huntly including in the laundry team, kitchen and domestic teams, but she loves her role in the activities team most. “I really enjoy the time I spend with the residents. I’ve known some of them for ten years now, so organising and leading activities is always enjoyable.”